Photos that should eventually cover the whole of the Wandle Trail, a 14 mile series of paths alongside the River Wandle from Croydon,
through Beddington, Carshalton, Morden, Merton, Wandsworth and to the Thames. There is a  PDF Map that shows the whole trail
from Croydon to the River Thames.

Officially, the Wandle Trail starts at East Croydon railway station, but the river actually rises in South Croydon but is underground until
Wandle Park east of Purley Way, then underground again until west of Waddon Ponds.

Google map of the Wandle Trail from Wandle Park on the right, then Waddon Ponds and Beddington Park.  Google Street view Covers
much of the trail with panoramic photos every few hundred metres from Waddon Ponds, photos taken from a bicycle. 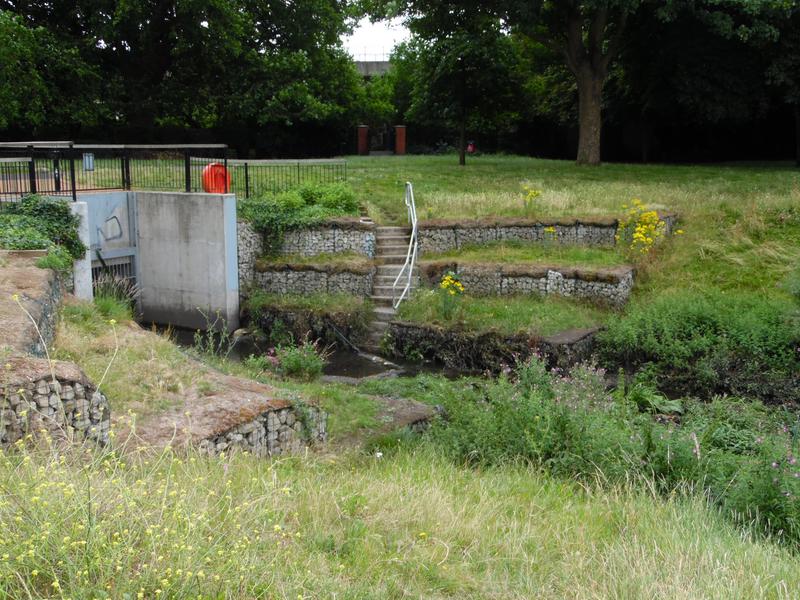 14th July 2017, Wandle Park Croydon, where the River Wandle is first visible above ground.  The source is springs in South Croydon,
but the river runs in buried culvert to this point.  It used to be buried in this park as well, but was opened up a few years ago. 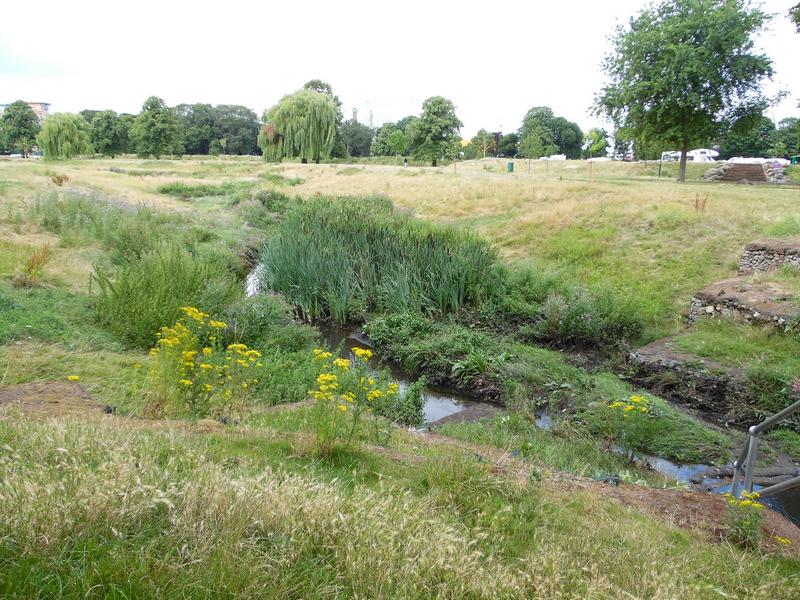 The river runs through Wandle Park, not very wide, a few Moorhens seen.   The water level here varies depending on local rain, and rose
a foot during a recent heavy rain storm. 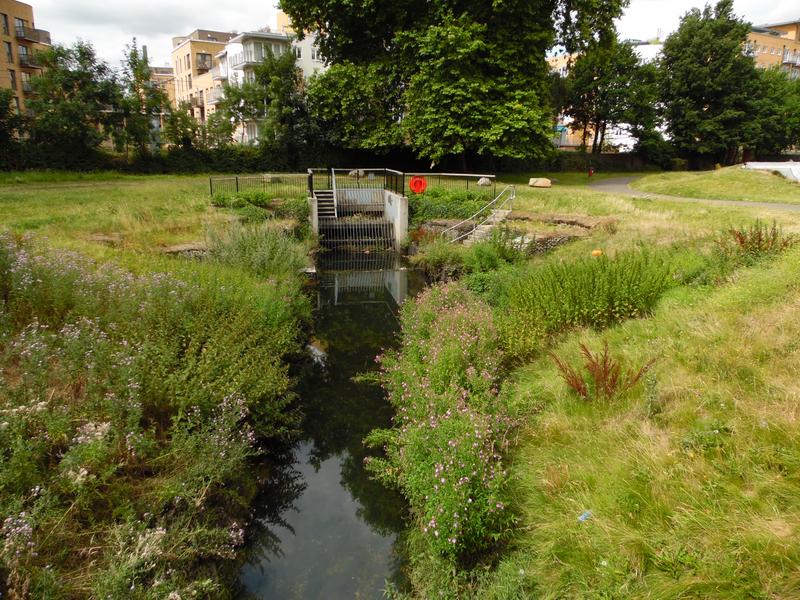 The river leaving the west edge of the park, where is disappears under the busy Purley Way road.

Waddon Ponds is fed by springs, and water leaves the lake through this weir into the buried culvert running under Purley Way and
down Mill Lane, where there presumably was a mill the past, but is now an industrial estate.

This is start of the Wandle Trail off Mill Lane, the left path leads into Waddon Ponds park, the right path is the trail and leads into woods.

Finally the River Wandle surfaces from the underground culvert near Richmond Green, with a much greater flow than left Wandle Park,
due to the extra water from Waddon Ponds.

Richmond Green on the far side of the river with a pedestrian bridge at the bottom of Lavington Road.

The trail does not run along the river all the way, there is a detour via Bridle Path, then back onto the path near Wandle Bank. until a
bridge under Beddington Lane.

There is then a pedestrian bridge from Guy Road, that leads in the eastern end of Beddington Park.

Along the river, there are various mini waterfalls, as the ground level lowers.  And where other tributaries join the River Wandle, including
clean water from Beddington Sewage Treatment Works, just north of here.

The course of the river gets confusing at the edge of Beddington Park, it appears to be on two levels at places.

Very overgrown here, but still did not see any water fowl.

Near Church Road and the sports fields, lots of buildings including Cardew Academy.

View from the bridge, we are now into the park proper, grass neatly mown, beyond the trees.

Approaching Church Road, which runs south/north through the park, leading to the Pavilion Cafe and sports pitches.

The river path is becoming more formal, with stone edgings.

There are no formal paths following the river in the centre of the park, just grass.

Fortunately there are several bridges over the river.

The river has just passed through a wood, then one of the formal park paths with another bridge.  Dogs can easily swim in the river here.

The east end of the lake, high bridge just visible.

The River Wandle leaves the lake in this stream and also over a weir in the distance.

The river channels curving away through the formal gardens.

Towards the edge of the park.

Another weir as outflow from the lake means the river through the gardens.

Sluice gates at the end of the lake.

The river channel beside the car park near The Grange towards the main road.

Finally the River Wandle leaves Beddington Park under the A237.

All photos and text on this web site is © Copyright 2011-2022  www.croydonducks.co.uk and may not be reproduced, copied or linked
without prior written permission.  All rights reserved.

The river continues to Wilderness Island through an urban housing estate, where it is joined by another tributary starting at Carshalton
Ponds.  From Wilderness Island, it goes through Dale Park and Poulter Park south of Mitcham, then to Morden Hall Park in Merton.
Hope to cover this section during October. 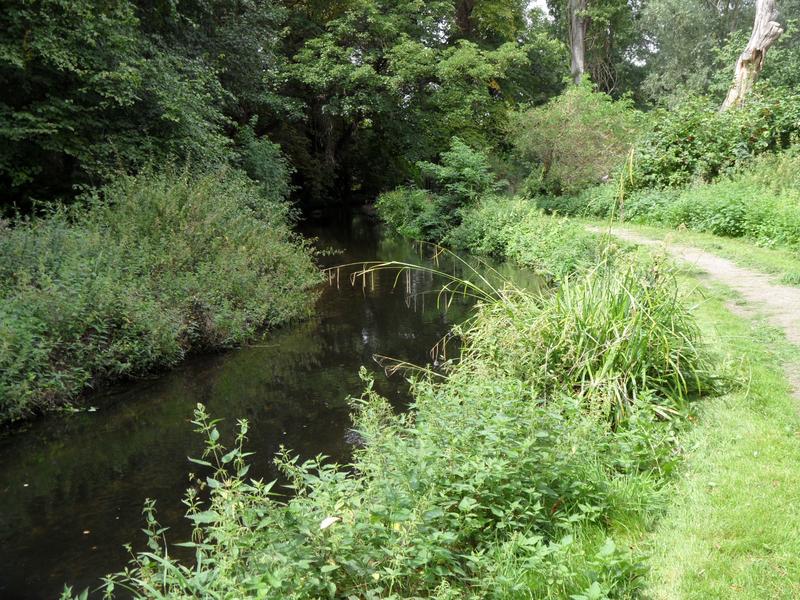 17th August 2011, the River Wandle enters Morden Hall Park near Mitcham, heavily bordered by trees. The river is fast flowing, and
shallow with a good solid rock bottom, so suitable for dog paddling. 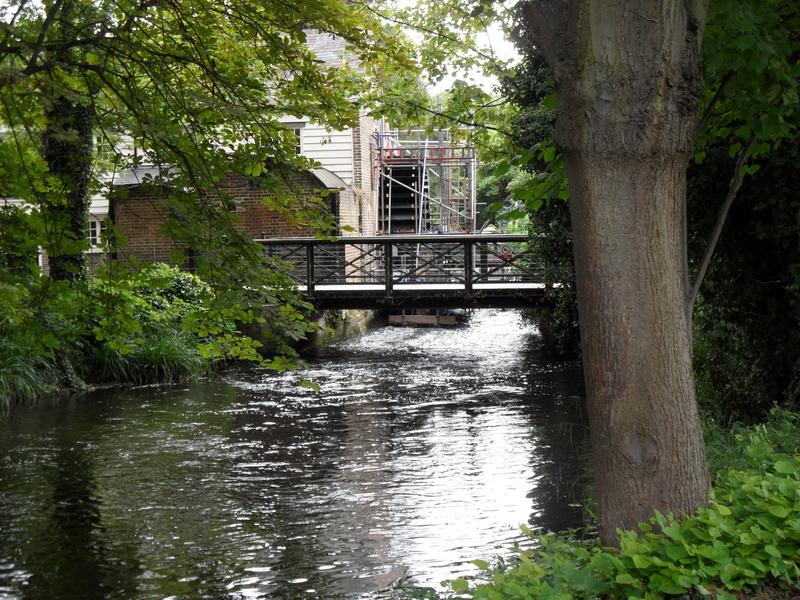 The sole remaining mill waterwheel on the river Wandle, with the bridge from the car park, cafe and stable block into the main park. This
is the main river, but there are also smaller flowing streams in the park. 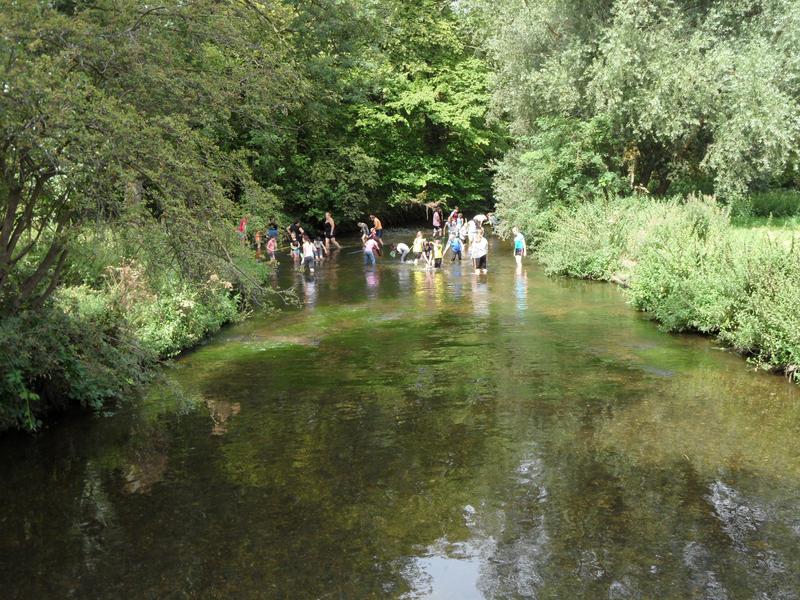 Beyond the waterwheel, the river is suitable for paddling, the kids mostly had nets but not sure what they catching.

The River Wandle continues north west from Morden Hall Park, through another Wandle Park in Collier Wood, then Wandle Meadow Nature
Park, Garratt Park, King George's Park in Southfields and finally through Wandsworth to the Thames.  Hope to cover this during 2018.